Charles Garrett enlists in the U.S. Navy and attends a 6-month Electrician's Mate School, which begins his formal education in electronics. He quickly advances to the rank of Electrician Mate 2nd Class Petty Officer and is placed in charge of the 14-man electrical department on board the USS Bottineau (APA 235), an attack troop transport, during the Korean War.

After his service in the Navy, Charles Garrett marries Eleanor Smith of Pennington, Texas. Eleanor is an elementary school teacher with the Nederland, Texas, school system. Garrett enrolls at Lamar University in Beaumont, Texas, and begins working towards his Bachelors of Science degree in electrical engineering.

Following Charles' graduation from Lamar University, the family moves to Dallas, Texas, where Garrett begins working for Texas Instruments. He becomes an integral part of the company's Space and Electronics division and helps design the solid-state amplifiers and power supplies for a data encoder which is used in the Mars-bound Mariner II spacecraft. He also designs the electronic radar scanning templates and controls for the F111 aircraft.

1962
The Garretts move to the Garland, Texas, area where Eleanor continues her school teaching career and Charles accepts a position as Project Engineer with the Geotechnical Corporation. He becomes heavily involved in several earth science related projects. He helps develop advanced seismograph circuitry that is planted on the moon by Neil Armstrong in 1969 to detect moon quakes and other seismic disturbances. Garrett develops several other earth science related devices.


1963
Charles Garrett rents commercial metal detectors and finds them unsatisfactory. He begins work in the garage of his Garland home to design, develop and build better ground search metal detectors.

1967
By 1967, Garrett competes with more than 35 companies who have a standing history of manufacturing and selling metal detectors. He recognizes early that his detectors must offer better searching capabilities than those available from his competitors.

1968
Garrett continues to improve his metal detectors by traveling with his family to field test his inventions.


Garrett sets up his first hobby trade show booth at the Prospectors Club of Southern California, which captures the attention of the best known treasure hunting talent in the country.

Garrett establishes the first distributor outlet, Bowens Hideout, a store owned by Harry and Lucille Bowen, in Spokane, Washington. Realizing the tremendous value of a distributor network, Garrett begins placing ads to set up dealerships across the country.

Garrett is also the first to overcome searchcoil drift by inventing (and patenting) a special coaxial searchcoil winding technique.

These discoveries launch Garrett to the forefront of the industry. Many of his competitors close their doors or later acquiesce that the Zero Drift Revolution, as it is now called, changed the metal detection industry forever.

1970-1979
1971
The Zero Drift Revolution sparks a movement towards an industry-wide effort to create technology that competes on the same level as Garrett's new detectors.

1974
The Gravity Trap Gold Pan is designed and patented by Roy Lagal of Lewiston, Idaho. Garrett begins worldwide distribution of this pan, which continues to be the world's most popular gold pan.

The editor of a national treasure hunting publication, The Association, contacts Garrett and offers to sell his detectors and gold panning products. He encourages Garrett to write a series of articles about his adventures, metal detection designs, hunting tips and advanced electronics precious metals locating technology.

1978
As gold prices soar, treasure hunters clamor for Garrett's detectors in the United States and internationally. Garrett receives requests to establish international dealerships. A treasure hunter based in London opens the first dealership outside the United States. Peter Bridge opens the first Australian dealership. By the mid-1980s Garrett Metal Detectors becomes one of the largest metal detector manufacturers with over 1,800 distributors worldwide.


The five-day treasure hunt takes place at the 120-acre Trader's Village Market located in suburban Dallas. Over 2,000 treasure hunters attend and over $100,000 in prizes including a pick-up truck, are given away. Hundreds of ardent admirers visit Garrett's factory in Garland that year.

1980-1989
1980
A free newsletter is published, which is distributed throughout the treasure hunting world. Garrett's article series, which focuses on his treasure hunting successes as well as personal search and recover techniques, greatly increases interest in Garrett detectors. He continues writing for the metal detecting and electronic gold prospecting industries.

1982
Garrett conducts seminars to teach Utah Fish and Wildlife authorities how to find bullets in animals that had been killed by poachers. This seminar proves to be Garrett's first official law enforcement seminar, which has grown into The Garrett Academy of Metal Detection.

Garrett is awarded the first U.S. patent for the use of microprocessors in metal detectors.

1983
In September, Garrett is invited to develop a walk-through metal detector for the 1984 Summer Olympic Games in Los Angeles. The tragedy of the 1972 Munich Games created an intense movement for increased security at the Olympics.


That year marks the first extensive metal detection screening efforts in the history of the Olympic Games. 60 walk-through detectors and 1,000 of Garrett's Pocket Probe hand-held detectors, as well as training, are supplied to the Olympic Games. The hand-held SuperScanner, one of today's most recognized security products, was first used at this event.

1987
Garrett provides security training and products for the PanAm Games in Indiana.


Garrett provides security training and products for the U.S. armed forces in Kuwait during the Persian Gulf conflict known as Desert Storm.

1997
The Garrett Academy of Metal Detection is formally established to offer certification in the use of metal detection equipment in checkpoint screening applications such as airports and special events.

Garrett supplies the SuperWand to all U.S. airports.

Garrett becomes the only U.S.-based manufacturer to meet TSA guidelines for walk-through and held-held metal detectors. Garrett supplies walk-through metal detectors to one-third of America's airports and to many overseas airports. Garrett introduces the Infinium metal detector, engineered for greater gold detection depth in heavily mineralized soil and for use in water to depths of 200 feet.

Garrett introduces the ACE series, the most advanced, low-cost metal detectors in the world.

2006
Garrett is featured on John Ratzenberger's hit TV series Made in America, which airs on the Discovery Network's Travel Channel.

Charles Garrett and a team of Garrett detectorists work with Texas Parks and Wildlife to recover and preserve artifacts from the San Jacinto battlegrounds where Texas independence was won.


U.S. Congressman Sam Johnson visits Garrett's headquarters to present a copy of the Congressional Record in which Garrett was recently recognized.


Garrett releases new hobby detectors for the ACE series, as the ACE 350 in America and as the EuroACE for its overseas version.

Garrett introduces the versatile AT Pro, a true all-terrain hobby detector which can be used for shallow water hunting. It includes an exclusive Iron Audio feature to identify iron trash and has a powerful new DD searchcoil to help overcome mineralized soil environments. 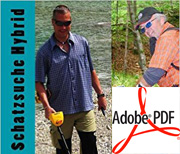